#488 : Visiting the fortified monastery of Akthala in Armenia

The monastery of Akhtala is an Armenian monastery-fortress of the Xth century, situated near the city of Akhtala, in Lorri’s marz, at 185 kilometers in the North of Yerevan. This monastery is not still in service now.

The site is occupied from the Bronze Age. The fortress is set up as 10th century. The monastery appears for the first time under this name in a royal decree of 1438; the name of Turkish origin Agarak would mean “white clearing”. The fortress played a major role in the protection of the regions of the northwest of Armenia and is one of better fortified of the country.

The fortress is built on a rocky hill, surrounded with deep canyons, what offers him a natural protection. On the sides of the attack, the plateau is protected by a wall in basalt, flanked by semicircular tours. The only entrance of the complex is situated on the north side, protected by an impressive circular donjon.

The church Sourp Astvatsatsin, situated in the middle of the fortress, was built between the XIth and the XIIIth centuries, on the rests of an older building. The church contained the cross which, according to the tradition, was used by John the Baptist to baptize Jesus. Cruciform, Sourp Astvatsatsin belongs to the kind of basilicas with dome, with foothills coupled with the side chapels of the apse. The church is characterized its frescoes dated the years 1205-1216, which establish one of the best representations of Byzantine art outside the traditional borders of the empire. The majority of inscriptions are in Greek. Today, the monastery is the place of a pilgrimage for Georgian and Armenian.

#558 : Getting on the Osman train of Hejaz in Jordan

#606 : Exploring the Scythian Necropolis of Besshatyr in Kazakhstan 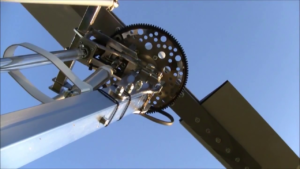 # 290: Flying on a ultralight gyrocopter