Qasr al-Azraq, in Arabic the “blue Fortress”, is a castle of the XIIIth century, built on the foundations of a Roman castrum. This castle, said by the desert, is situated the periphery of current Azraq, approximately 100 km east of Amman in Jordan. The castle controlled the oasis of Azraq, the only perms spring of fresh water of the surrounding desert, on about 12 000 km2.

The castle was reconstructed in 1237 by the ayyoubide emir ‘Izz ad-Din Aybak, on the vestiges of a castrum, occupied alternately by the Byzantine then the Omeyyades. In the XVIth century, the castle was occupied by an Ottoman garrison. In winter, 1917, during the Arabic revolt against Ottoman Empire, T.E. Lawrence – more known under the name of Lawrence of Arabia – established his headquarters there, and installed his office in the room contained in the tower gate.

The castle, built in black basalt, follows a quadrangular plan of 80 meters aside, flanked in each of its angles by a quadrangular tower. The entrance is deserved by a square tower, protected by machicolation, which gives in a big central court, where is situated the vestiges of a small mosque, doubtless of Omeyyade period. The entrance is protected by a door with exceptional  double stone leaf. Every leaf weighs not less than 3 tons, and turns a pivot crashed in the ground, greased with palm tree oil… 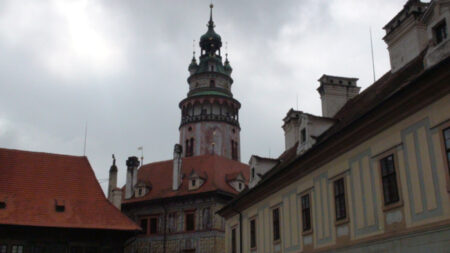