Idea #471 – Getting on the danish Fregate Jylland

Jylland is a steam warship, beating the Danish royal Marine flag. This armoured frigate of 44 guns, rigged in square three-master, was built on the naval base of Holmen on plan of O.F. Suenson, and endowed with a machinery designed by the English-Danish naval engineer William Wain. The ship possesses a wooden shell of oak, armored by cupper plates. It is equipped with a steam engine which allows the propulsion by a propeller at 11 knots, with a 1500 nautic miles autonomy. This ship is 71 meters long, for a mass of 2456 tons and could welcome up to 437 sailors.

The frigate was launched on November 20th, 1860. It participated in the battle of Heligoland, where it was serioulsy damaged. After this war,the it served as training ship and navigates in the Atlantic Ocean, in the Mediterranean Sea, to the Caribbean and in South America. On August 1st, 1874, it welcomed on bord Christian the IXth of Denmark. In 1887, it has been disarmed, then transformed into floating barracks in 1892, and was definitively put out of service in 1908. It was restored and opened to the public in 1994, becoming the unique wooden frigate of oak with propeller of the Danish navy. 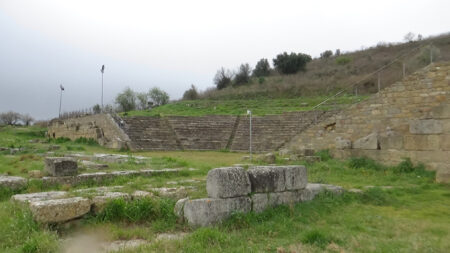 #744 : Exploring the archaeological site of Morgantina in Sicily

#530 : Observing the big colonies of fur seals at Cape Cross in Namibia