#428 : Sharing pinuts with Monkeys of Barbarie

Idea #428 – Observing the Monkeys of Barbarie in Morocco

The Macaque of Barbarie (Macaca sylvanus), also called Berber Macaque, is the only macaque living on the African continent, to the wild state, in the forests of Morocco and Algeria, as well as on the rock of Gibraltar, where it represents with the man the only primate of Europe. Other species of the genre Macaca living mainly in Asia of the South and the Southeast, it is considered as one of the ancestral forms of the twig of the macaques which appeared in Africa there is 5,5 million years. Nevertheless, its morphology and its ecology testify of a real adaptation in the conditions of life in the Middle Atlas and thus, although the species always stayed on the continent of the origins, it postpones largely first appeared macaques.

The coat of this monkey is of ochre-fawn color in almost black, according to the season and the individuals. In a general way the lap face is much clearer than the dorsal face and the extremity of the darker members. The Berber macaque presents a number of morphological adaptations to the cold bound to the mountain environment where he lives, moderated the summer and rigorous the winter. Such adaptations are rare at the primates and testify of the big adaptability of macaques.

The eating habits of the Berber macaque are forced to the strong seasonal variations and from a population to the other one, to the variations of housing environment. It feeds mainly on glans, on barks, on cones, on needles of cedar, on mushrooms, on bulbs and on animal preys as insects and on amphibians. The Berber macaque was formerly spread on all North Africa and probably a part of Southern Europe but sees its population today reduced on some isolated mountainous zones of the Maghreb. A recent study estimates the number of surviving Berber macaques to 10 000 individuals, is a regression of more than 50 % within thirty years. 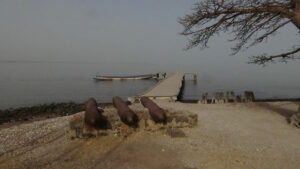