The railroad lines created by the English people in the 1880s are now a part of the Indian folklore. Darjeeling Mimalayan railway is inaugurated in 1881, first example of mountain railroad was intended for the passengers transport. Its design and its realization required the implementation of audacious and ingenious solutions, because of the constraints of reliefs and topography. In the State of Tamil Nadu, construction of the Nilgiri Mountain Railway, a simple way 46 km long, ruled out by 1 meters, began to be designed in the 1854s, but was really begun only in 1891, and inaugurated in 1908.

This railroad represents the high technology of the time; runner of 326 meters above the sea, he allows to reach the full stop 2203 meters. Finally, Kalka Shimla Railway, 96 km long, always in unique way, was built in the middle of the XIXth century, to serve the city of Shimla, situated on highlands. This three railroad are in service even always and in exploitation. They are registered on the UNESCO world heritage list since 1999.

#328 : Observing the otters of the isle of Mull 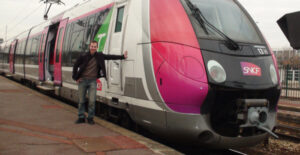