#124 : Sorting the waste with a crabber macaque

The Macaca fascicularis is native to Southeast Asia macaque, commonly called long-tailed macaque because it differs from other macaques by the length of its tail, similar to that of his body. The species is also known by the names of  crabber macaque, Java macaque or cynomolgus monkeys. Depending on subspecies, the length the body of the adult monkey is 38 to 55 cm , with relatively short arms and legs. Adult males weigh about 6 kg , and are usually larger than females, which weigh from 3 to 6 kg. Group size often depends on the risk of predation and food availability. These monkeys are despotic and have a strict dominance hierarchy. These monkeys can attack the human are opportunistic omnivores, and can eat a big variety of food and plant. Although fruits and seeds are 60-90% of their food intake, it also feeds on leaves, flowers, roots and bark, invertebrates, and can produce great depredation on crops rice, cassava, coconut, and rubber. It is not rare moreover that it feeds on trash cans! Go, brother, wesch… 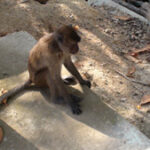 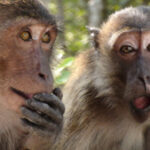 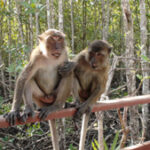 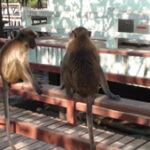